the Doctor and his companions arrive in the strangest of places where, in order to survive, they need to play a life size tile matching puzzle game. Is this the end for the Doctor?
A fanfiction featuring: the 12th Doctor, Madame Vastra, Jenny Flint, Jo Grant, Sarah Jane Smith and Rory Williams.

this is a tribute to the game ‘Doctor Who: Legacy’, and to the people behind it, Susan and Lee Cummings, the teams of Tiny Rebel Games and Seed Studio.
No financial or material profit is generated from this story and no copyright infringement was intended. 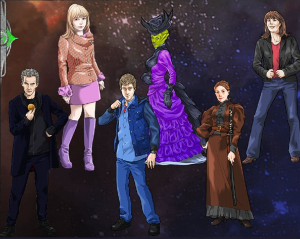 Doctor Who: Legacy – I’ll keep you safe
(by my standards)

The Tardis shook violently as it went through another temporal anomaly. The Doctor, eyebrows frowning in concentration, was focusing on stabilizing his ship, while his companions were clinging on anything they could find to keep their balance.
‘How do you do it?’ Jo Grant shouted over the rumbling sound the Tardis was making.
‘How do I do what?’ The Time Lord shouted back.
‘Not falling down when it’s shaking and rocking like this. It doesn’t make sense!’
Sarah Jane Smith smiled at her:
‘He’s probably going to tell you that it’s because the polarity is reversed where he is standing.’
‘I had to reverse the polarity of the stabilization field around the console to allow…’
He paused, realizing that he had basically been repeating the journalist’s words.
‘Alright, this should work. Brace yourselves!’
The Doctor lowered a lever, and the ship went quiet instantly, saved for the central column that was going up and down steadily.
‘Ha ha!’ The Time Lord said, clapping his hands together. ‘I told you it would work!’
‘Yes, but… where are we?’ Rory Williams asked, still holding on to the handrail, just in case things weren’t totally in control. Experience had taught him that you could never be absolutely certain with the Doctor.
The Time Lord looked at the scanner and resumed his frowning.
‘This is odd…’ He said before walking towards the door.
Jo followed suit.
‘Are you sure this is safe?’
The Doctor shrugged: ‘Safe doesn’t apply to humans. You are doomed to die, and you don’t know when and where. Especially when. That’s why you can never be safe. But I have a duty of care. So I’ll try to make sure that you’re safe by my standards.’
‘I feel better already,’ smiled Sarah Jane, while Rory rolled his eyes.