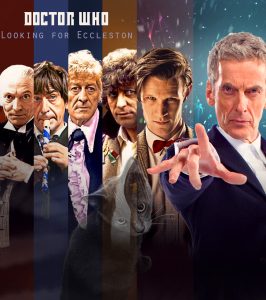 This story has been written as an answer to Broken Chameleon’s challenge. I managed to include it in the NaNoWriMo Projet as well…

Sixth Interlude
We remained silent for a little while. We had woken up some old memories and we needed to deal with them.
“It’s been quite a while,” the Doctor said softly. “Over thirty years in Earth time.”
“Less than ten on my account, those are the joys of time paradoxes…”
Both he and I were trying to avoid one particular topic. When the atmosphere in the living-room became so awkward that even Eccleston stared at us disapprovingly, I finally asked:
“Did you manage to stop him?”
The Doctor looked down at his feet and asked:
“Do you still have my scarf?”
“Yes,” I replied. “Now it’s your turn, did you stop him?”
“Yes,” the Time Lord replied relunctantly.
“And?”
“And I can’t tell you the future. Suffice to say that I checked afterwards and regretted that I didn’t follow your advice.”
My heart felt heavy hearing this confession.
“There might still be a chance that all those events don’t happen after all,” I told him without exactly knowing if I wanted to comfort him or myself.
He didn’t react and looked down at Eccleston.
“The TARDIS is now accurate,” he said. “I can bring you back exactly when you left.”
I couldn’t help but smile.
“And still you brought me Eccleston to ensure that someone looks after him when you are away. You always knew that I wouldn’t join you anyway.”
“And I wonder why. My companions usually want to come along. It’s only after some time with me that they want to go back to their homes and lead a different life from the one I offered them.”
“It’s too scary. It might be fascinating to visit other worlds, planets and times, but in the end I would always be afraid to loose you one way or the other. How would I go back home, then? It might sound selfish, but I don’t feel brave enough to take that risk. I’d rather have you telling me all your wonderful stories when you visit.”
The Doctor was still smiling when I was done talking. Strangely I felt as if a burden had been removed from my chest.
“It might be dangerous sometimes, but there are funny moments too, you know. Did I ever tell you about that time when Eccleston got lost and I was forced to attend U.N.I.T’s annual karaoke night?”
Looking for Eccleston • nouvelle