Eccleston is the Doctor’s cat and one of his oldest companions.

He is rescued as a kitten by the Second Doctor on the 21 October 1966 during the events of the Aberfan disaster (“The Day the Doctor said No”) and travels with him, Ben and Polly, until the couple decides to get on with their lives (“The Faceless Ones” – TV). They welcome Eccleston with them and promise the Doctor that they will take good care of him.

The Third Doctor briefly meets Eccleston while teaming up with the Second Doctor after the TARDIS is stolen (“Chaos in the Laboratory”). 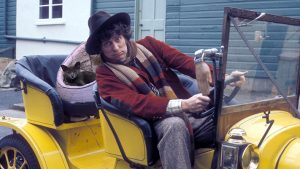 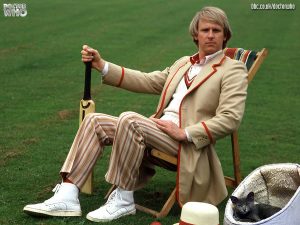 The Doctor is briefly reunited with his cat during his Fifth incarnation when he tries to escape from an angry crowd that has been turned into zombies “We, Zombies“. After saving the Time Lord, the Chartreux cat spends some time with him but eventually gets annoyed with this incarnation and leaves the TARDIS. Rumour has it that Eccleston is the reason why the Doctor’s Sixth incarnation wore cat pins. He never stopped hoping for his cat to return… 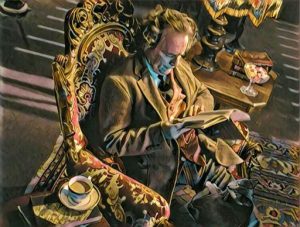 Unknown to the Doctor, Eccleston has found shelter in the Rani’s TARDIS and sneaks back into the Doctor’s TARDIS while the Rani impersonates Mel (“Time, fashion and the Rani”). Unable to adjust to Mel Bush’s high pitched voice, the Chartreux cat lives deep inside the TARDIS and becomes quite an expert in orienting himself into the time and space machine’s labyrinth. After the Seventh Doctor is injured while trying to repair the dimensional stabilisers, Eccleston leads him through the unstable TARDIS to the console room where he meets Ace for the first time (“The Day the Doctor lost his Map”). They all go along quite well until the events of “Survival” (TV). After that, Ace has trust issues with Eccleston who takes refuge in the depths of the TARDIS until Bernice Summerfield comes on board and organises a therapeutic session with Ace, Eccleston and The Doctor (“Trust me, I’m a Professor”). 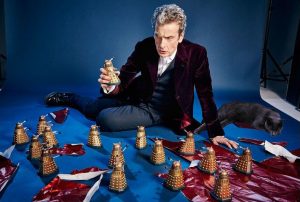 Eccleston sets off with Bernice for a while before returning to Earth, around the time the Seventh Doctor regenerates into the Eighth Doctor. He takes refuge at U.N.I.T. headquarters where he lives happily until he meets the Ninth Doctor. From this point, he has on and off adventures with the Doctor and his companions, until he decides that he wants a proper home. Eccleston is adopted by Suzanne under some conditions (“Are you my Grandfather?”), but doesn’t mind the occasional adventure in time and space… Like this time when he has to operate the TARDIS on his own after the Twelfth Doctor collapsed following a contact with the occupant of another TARDIS. In order to save the Doctor, Eccleston brings aboard Captain Jack Harkness and Professor River Song (“The Day they met“). 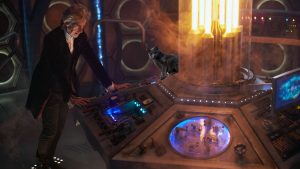 Eccleston has telepathic abilities (“The Man who always got himself into Trouble”) which he uses to communicate with the Doctor. He’s quite possessive and picky when it comes to companions. Unlike the Doctor who changes face, the cat seems to regenerate in the same form and species, making it impossible for anyone to know exactly how old he is. Eccleston knows the TARDIS better than anyone (even better than the Doctor…). He now lives in France, but doesn’t mind the occasional travel and adventures with the Doctor… 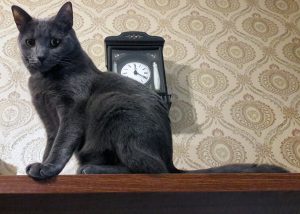 Eccleston is a “real” cat, born around June 1st 2016 (in this regeneration at least). He was part of the 2016 National Novel Writing Month project which was organised on the Amino community “The Daily TARDIS”. Members would request for a specific story involving a specific Doctor.
Since then, Eccleston has become famous for being the Doctor’s cat and he does now have his own fanbase!